This month, Ben Thompson tells Hannah Sackett about the club he runs at Stoneydown Park School in Walthamstow, London.

Where do you meet and how often? The Art Room at Stoneydown Park Primary School, once a week.

How long have you been running? One year.

Tell us about your club: The group is made up of children from years 3, 4 and 5. We meet up after school on Fridays, and sit around a big table in the Art Room. Often there’s a starter activity. Usually this involves me giving out a bunch of little mini-comics that I’ve started, and getting the children to finish them. The endings they come up with are usually incredibly gory! After this, everyone gets on with drawing whatever they want – unicorns, weird worlds, things from Minecraft etc., Sometimes someone brings along some glittery pens or some pretty stationery from Smiggle. Sometimes snacks get shared out. At the end, we do a ‘show and tell’ of what we’ve drawn (if there’s time) and then we all go home!

Do you have a comic club activity you’d like to share:
We’ve had quite a lot of fun doing collaborative, two-panel comics. One person does the first panel and then passes it to a second person to complete. There aren’t too many rules about how to do this, but it helps if the first panel has at least two characters in it. Also, it helps if there’s something a little bit unusual going on e.g. maybe there’s a strange object, or maybe one of the characters is doing something unusual.

The drawing club have also contributed a Comics Challenge for this month – check it out here! Thanks to Ben and the club members for sharing their ideas and drawings.

You can read about the comic they contributed to the Comic Swap here and read reviews of it here.

Hannah Sackett caught up with Gill Pawley of Inkpots to find out about the Inkpots comic club.

Where do you meet and how often? We meet on Wednesdays at one of our after school clubs.

How long have you been running? For about nine months.

We started the club after discovering Comics Club Blog and realising how many children just loved comics and drawing cartoons. It started at one after school club but has now spread to other groups

Do you have a comic club activity you’d like to share: There is always lots of interest in anything to do with chocolate…

Which comics should we be reading right now? The Phoenix is a big favourite! 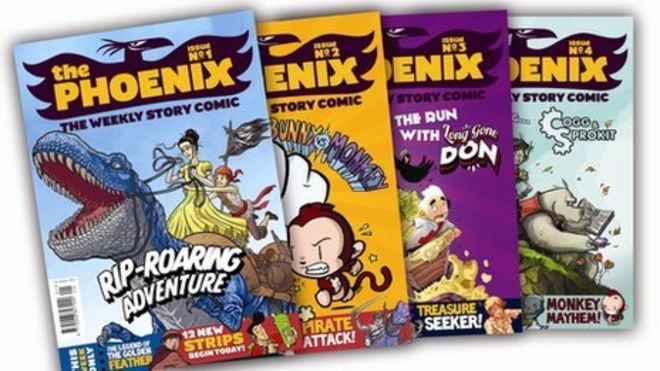 What are your plans for the coming year?

We plan to have a big get together of all the Inkpots children who like comics and have a giant comics jam. We also hope to have one of the contributors from The Phoenix come and run a workshop for us.

Many thanks to Gill for talking to us and to comic crew members for sharing their cartoons! We’re looking forward to them reporting back on their giant comics jam!